A really good client of ours has been colocating with us since late 2003. They’ve grown their web application from running on a Xserve 1.0Ghz DP G4 to an Xserve 2.0Ghz DP G5, then moving their database off to a separate big hardware RAIDed Dell server.

They came to us about a year ago (May 2006) and said they were getting a big new client who wanted to run their entire site on their system and they were going to need a load balanced system with plenty of power and scalability. Earlier in the year (Feb 2006), Apple had introduced their second generation MacMini that now sported the new Intel Core Duo chips along with Gigabit Ethernet. At that time, we were also concerned about increased power usage in our cage, so we picked up an Intel Mac Mini 1.66Ghz Core Duo, had it upgraded to 2GB of RAM (the G4’s could only handle 1GB) and started to really put it through it’s paces.

It turned out to be a real winner.

The final configuration we ended up with was:

We worked with the client to help factor their web application so that it could be properly load balanced. Changes were necessary in the following areas:

After all the hardware and software was ready, we setup the content rules for the load balancer and turned it on. It was very gratifying to see the Minis perform very well even under adverse load conditions. (The big client sends out large email newsletter runs that bring flash crowds to the site.)

One of the more interesting experiences we’ve had with this system was when we migrated their Xserve G5 in as web server #4 in the load balanced group. Mind you this is not a puny box. We even upgraded the drive system in it to a hardware RAID 5 based set. Since that time we have had to periodically adjust the weighting rules on the load balancer to give more and more priority to sending hits to the Intel Minis instead of the Xserve G5. We are now at a 3:3:3:1 ratio and the Xserve is finally at a lower overall load average than the minis.

Yes, you read that right: the Intel MacMini is somewhere between 2 and 3 times faster than a Xserve G5 in raw cpu performance.

And it uses one fifth the power. With a nice sliding rack tray, you can easily get 6 of them into a 2U space. (excuse the cabling mess) 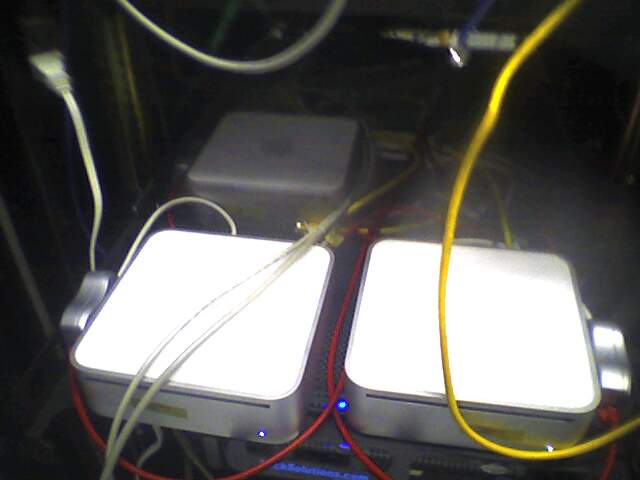 We’ve also considered a different configuration whereby we set the Minis on their side and “stack” them horizontally. The Mini is right at 2 inches tall and a 6.5 inch square, so accounting for some space for air flow and cabling you could get 7, maybe 8 of them in a row, resulting in a 4U tall set. With the right mounting, you could get easily 2, maybe 3 of these rows on a sliding tray. You do have to account for the external power supply, but that separation actually works out as a major benefit as the cables could be run so that you have a single U of dedicated space for the power supplies and put some directional cooling air flow over them.

Result: With only 2 rows of Minis, you get:

The Intel Dual Xeon Xserve looks promising as well in terms of raw cpu performance, but I’ve seen reports that it suffers from the same high power consumption as any other Dual Xeon system does: ~ 3A. However, this is TEN TIMES the power consumption of a MacMini, so for a high density web farm, this is not a better solution. Better to utilize that Intel Xserve as a database server to take advantage of it’s greater RAM capacity (32GB), increased threading (dual dual-core) and 64-bit capability.

Related CPU performance anecdote: We have another client with a Compressor video encoding grid made up of Intel MacMinis and he found out (Apple also confirmed it) that he needed to remove the PowerMac G5 DP from that grid as it was the weakest link!

In summary, a MacMini based farm is a powerful solution for almost any web application. You get low cost, low power, the ease of use and security of a OS X based system. A very compelling formula. Our client is very happy and is looking to add 2 more MacMinis in the near future. We’ve built this type of system for another client and they are extremely happy with the performance of their web application, too. If your organization is interested in a MacMini web farm, please contact us for a quote.

Some additional links regarding MacMinis

I’ve posted a followup to this article.

We did add 3 more to this setup a couple months later. Here is the gaggle: 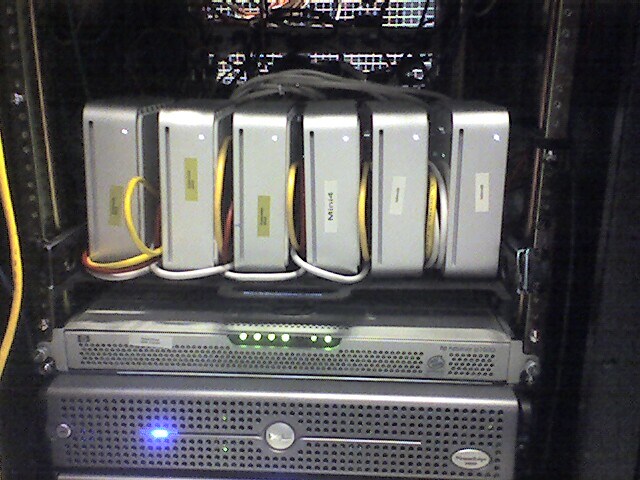